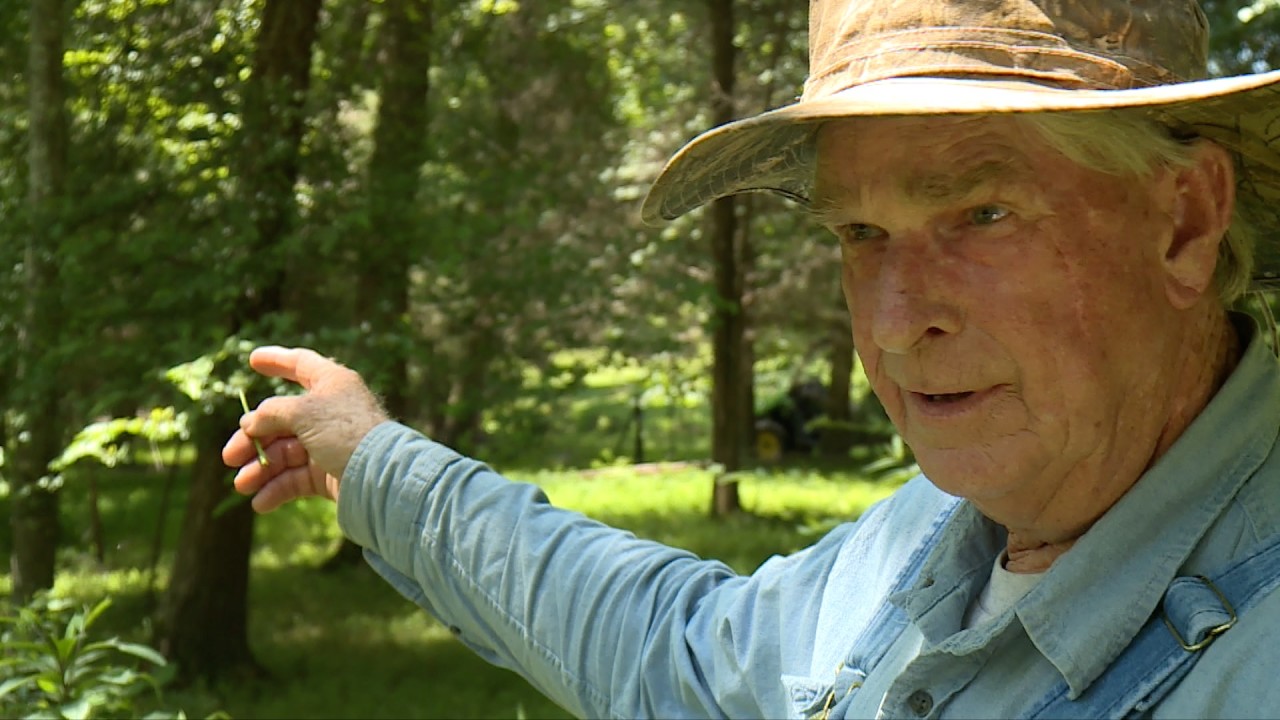 “This property has been in our family for four generations,” Marks said. “We own about 265 acres of farmland, pasture land woodland combined.  No price on it. It’s valuable to us.”

However, they say with each rain their land is being threatened by their new neighbor.

“If they want a solar field back there, that’s their property and their business,” Collier III said. “But when you destroy surrounding land, then it becomes our business.”

“If I’d have done something like this to somebody else’s property, then probably Department of Environmental Quality (DEQ) and Louisa County would have me in jail or fine me,” Marks added. “This big company comes in and you can tear up creation and nobody does anything about it.”

The neighbors say since last fall, every time it rains, a little more of their land is being washed away by excess stormwater runoff from Dominion Energy’s Belcher Solar Project.

“They built this thing on cliffs nobody had any business being on,” Marks said.

The farmers reached out to the Virginia Department of Environmental Quality when they say they didn’t have luck with the county.

“We started calling around getting people involved in it, a lot of people, well supervisors, we tried to get ahold of them to come over and look at the damages, they wouldn’t come out,” Marks said.

Under the Freedom of Information Act, the CBS 6 Problem Solvers obtained records on the solar project dating back to July 23, 2020, when stormwater runoff from Belcher flowed into Harris Creek.

Last October, Dominion confirmed the contamination had been hand removed from impacted areas, and erosion and sediment control repairs and improvements were in place. However, that was around the same time neighbors of the solar plant started experiencing issues and eventually documenting them on social media.

“If it keeps going, and they don’t get the calculations right on the water flow, then what’s going to happen is all these properties that this affects, it’s not going to be a creek anymore,” said Collier. “You’re going to have a river and I’m going to have, it’s just gonna be a mess and I don’t want to leave a mess to my kids.”

The DEQ re-inspected the property on August 10, 2021. The inspections noted observations and recommendations.

The power company has submitted responses [here and here] to the county and state on the basins behind Marks’ and Collier’s properties and updates on seven other basins on the solar property.

The DEQ said Dominion notified them on September 21, that the company made an Erosion and Sediment Control (ESC) plan modification submission to Louisa County.  Dominion was granted an extension of submittal to DEQ until October 20, 2021.

DEQ said it had not received notification from the county that the ESC request has been approved.

“DEQ anticipates that the submission will meet the necessary requirements but will be unable to confirm until the documents are received and reviewed,” DEQ spokesperson Irina Calos said.

“We’ve double-checked the engineering, it measures that it is working according to plan, it’s going to continue to work in the future,” Dominion Energy Consultant Sterling Turner said. “But, we understand that there are issues to those neighbors, which are directly adjacent to us and so we’re looking, working with them to go above and beyond the basic engineering requirements and address those and we hope to find some, some resolution.”

The residents say Dominion has met with them on multiple occasions as recently as last week.

Some Louisa County Board of Supervisor members who visited the property after a CBS 6 inquiry and meeting with Dominion, were critical of the project at their September 7 meeting.

“The very people who approved this project also visited the site, and they said that this was a terrible situation. They called it catastrophic. What is your response?” Problem Solver Laura French asked.

“Well, I understand the snapshot people could have, you know, extreme opinions, but this project has had its challenges and has made some mistakes, and we understand that and we’ve worked diligently to address those issues,” said Turner. “I think that it’s a, building a site on 1,000 acres is a long process, it’s a multi-year process, and it’s largely dependent on the vegetation.”

Dominion said it was aggressively trying to establish permanent vegetation to minimize runoff which they say is the result of extreme weather in the middle of construction.

“The main challenges were the storm season in 2020 that led to violations that we’ve resolved with DEQ then that set back the ultimate stabilization, the time frame, there were delays for the ultimate stabilization and, we are rapidly addressing those and resolving those and are back on schedule for that timetable to reach the final condition,” said Turner. “Implementing a lot of resources, working with our contractors to use advanced techniques for vegetation to make sure that it happens as quickly and as completely as possible.”

“The new stuff didn’t amount to anything,” Marks said. “The result is a disaster going on, it’s still going on.”

“If something isn’t done you know, we’ll have nothing left over here in time,” Collier said. “To the county, I would say you need to start treating a lot of these projects like you live next to them. Because I guarantee you if any one of those Board of Supervisor’s houses were or land backed up to this, this wouldn’t be here.”

“The Board of Supervisors understands the need for the development of renewal (sic) energy, but such development must proceed in a manner which includes measures to protect those in the vicinity of associated projects,” Louisa County spokesperson Cindy King said. “We share the Department of Environmental Quality’s dedication to reasonable regulations which mitigate off-site impacts. With regard to the Belcher project, the Board continues to advocate directly on behalf of impacted citizens and our ongoing efforts with Dominion represent an important tool in this regard.  The Board has also formed a Utility Scale Solar Development Committee, which has already recommended against the development of future solar projects which do not demonstrate significant commitment to thoughtful development and enhanced protection of surrounding resources.  The County is committed to the protection of our citizens, and the Committee will continue to work with staff and outside agencies regarding reasonable future measures.”

“We’re never going to agree on everything but making sure that we can answer each other’s questions and maintain that communication is key and even if they are making critical comments, we want to be able to make sure that we’re able to respond and talk with them in a positive way and we’ve been able to continue to do that,” Dominion Energy External Affairs Manager Sarah Marshall said.

In its Board of Supervisors meeting on October 4, Louisa County announced it received a letter from the DEQ offering to take over reviews of erosion and sediment control plans for utility-scale solar projects over five megawatts.

The BOS is expected to vote on this at its October 18 meeting.  If the resolution passes, the DEQ would take over solar projects for the local soil and water conservation district, over five megawatts.  This is being offered to jurisdictions across the Commonwealth.

The DEQ is offering it to localities throughout the state as a result of amendments to the Erosion and Sediment Control (ESC) Law passed by the General Assembly this year. “The law enables these localities to opt to have DEQ review ESC plans for such solar developments along with the agency’s review of Stormwater Management plans. After reviewing ESC plans, localities will still have the opportunity to approve or deny the plans,” said Calos.