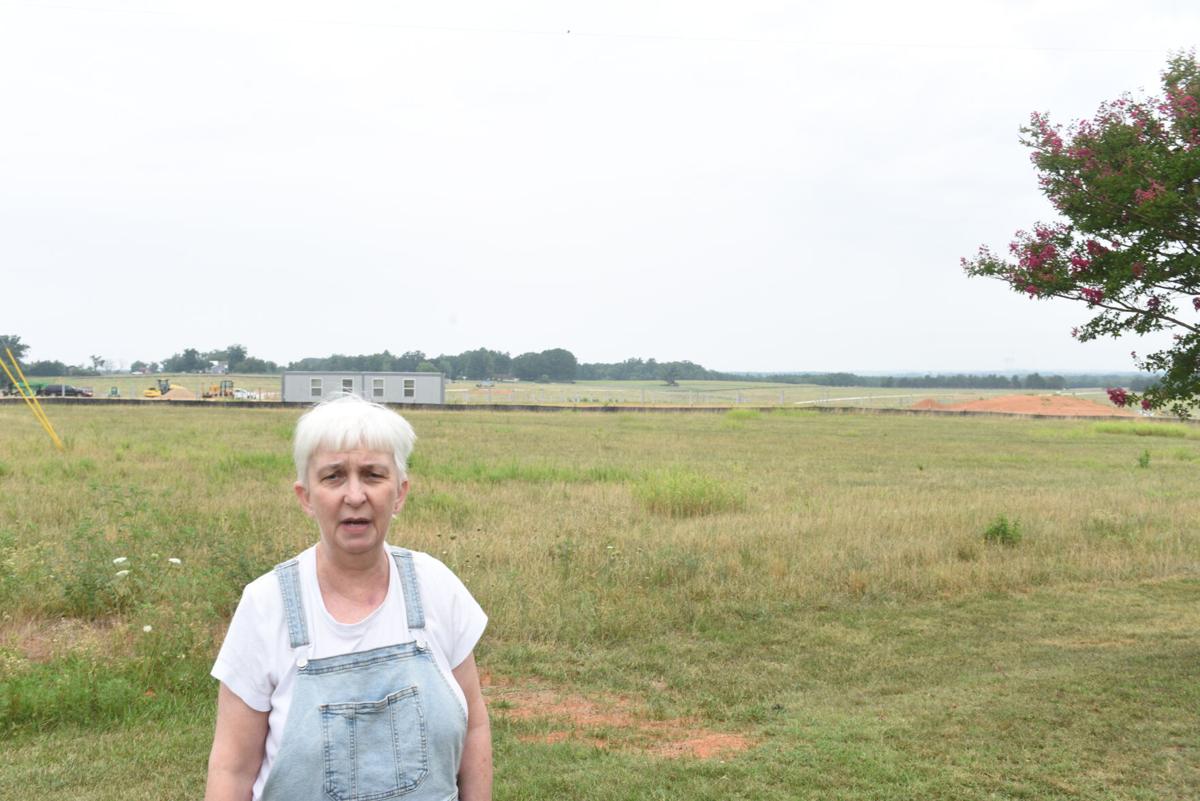 “We feel like we’re living in a fish bowl,” Whitt said during an interview outside her and her husband’s home Tuesday morning. “We had no idea we would have to look at it 24/7.”

At times, noise from construction on the project is so loud and constant Whitt and her husband escape by hopping into their car and leaving their home.

“Six or seven days a week, it’s ‘beep beep beep’ and ‘bam bam bam,’” she said. “When they put those poles in, it about sent me over the edge.”

Technology giant Amazon has announced it is partnering with Arlington County to purchase the energy from the Pittsylvania County solar project which is being named Amazon Arlington Solar Farm Virginia.

The project is 7 miles northwest of Chatham.

Formerly called the Maplewood Solar Project, the solar farm is being developed by Dominion Energy. Construction began last year, and the project has an expected completion date in 2022.

A representative with the project would not comment for this story.

Whitt told the Danville Register & Bee she felt like she was mislead after being told by a representative in the summer of 2020 that there would be no noise. “It was going to be peaches and cream,” she said.

“We’re getting absolutely nothing out of this mess but a hard time,” she said.

She said she was not told ahead of time about a public information meeting that was held on the project last fall. Whitt feels like she has been betrayed by county officials, the project’s developers and the property owners who allowed the solar farm on their land.

But Pittsylvania County community development director Emily Ragsdale said state law requires all adjacent property owners be notified by mail when an application for a special-use permit — required for all solar projects — is submitted.

Public hearings are also held at a planning commission meeting and a board of zoning appeals meeting.

“This is the opportunity for any concerns and/or objections related to the project be voiced,” Ragsdale said. “If approved, conditions are placed on the special-use permit that must be abided by.”

The county reviews all construction plans to ensure compliance with conditions before permits are issued, she added. County officials also monitor projects during and after construction to make sure conditions are being met, she said.

Climax Road farmer Kevin Owen, along with members of his family and other parties, have allowed the project to be built and to operate on their property under an agreement.

He said he doesn’t understand how anyone could feel betrayed. The owners are within their rights to allow the project on their property.

“All of that went through the permitting process,” Owen said. “Neighbors had an opportunity to attend zoning meetings. If you were adjacent to the project, you were sent a letter. It’s not like it was hidden from them.”

In addition, the project is on Owen’s property in front of his house, he said.

Whitt and her neighbor, Art Brunner, support solar power, but Whitt said, “I think it’s a great thing, but I don’t want it in my backyard.”

Brunner believes solar can play a role in the nation’s energy needs.

“Solar’s a good idea, but it’s not 100% effective for curing all the problems with energy,” he said, adding that the project on Climax Road has created noise problems.

But the noise will only be temporary, until the project is built, Owen said.

“In less than a year, it will be very quiet,” Owen said.

Whitt is also surprised by by the scope of the project. Ragsdale said its limit of disturbance would be about 860 acres.

“We had no idea it was going to be this massive,” said Whitt, who has lived in her Climax Road home for 17 years. “A project this massive should never have been allowed to be put in this small an area where people live.”

Whitt is also concerned about how it could affect property values.

“Who in their right mind wants to buy a house in the middle of this mess?” said Whitt, who lives on 3 acres. “I wouldn’t.”

Another Pittsylvania County resident, Joe Rogers, said he does not oppose solar power but believes there should be not just overall county regulations on all of them, but project-specific requirements that must be met.

“When you have a large project, it should be evaluated as a large project specific to where it’s going to be,” said Rogers, a retired civil engineer and former Chatham mayor.

If a solar farm is above a certain number of acres, it should have other types of requirements, he added.

The county recently updated its code regarding utility-scale solar projects to include stricter guidelines that must be followed, Ragsdale said.

Skeptics of solar power have also raised questions about what will be done with the equipment when a project reaches the end of its life.

“All projects are required to submit a decommissioning plan giving a timeline for removal of all equipment and restoration of the property to the original state,” she said. “Additionally, a decommissioning cost estimate prepared by a licensed engineer is also required and the county holds a bond for that amount to ensure that the plan is implemented.”

Rogers, in a Facebook post from July 15, lamented the the blighting of the landscape in the area along Climax Road where the solar farm is being built.

“Unlike the remote Southwest, this blight of green energy essentially surrounds the community,” he wrote. “Scenic farmland worked since colonial days is now a forest of posts stretching thousands of yards, almost out of view. These posts will support the limitless mass of black panels. People who have lived for generations in this pretty area will be stuck with this view and, in many cases, condemned to look at it the rest of their lives.”

As for Owen, solar projects provide a source of revenue and a way for farmers to hold on to the rest of their land.

“I’m OK with alternative energy,” Owen said. “I view it as an alternative. Don’t put all of our energy needs in one basket.”