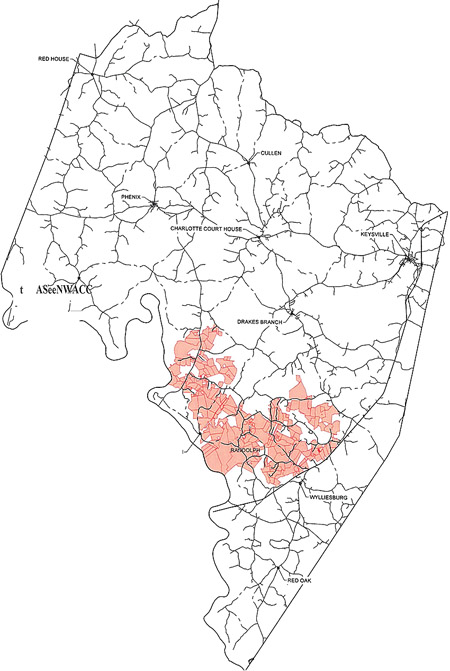 South Hill attorney John Janson filed suit on behalf of Faye Trent individually and as a fiduciary of Ruth A. Hansen Wilcox to halt development of the 800-megawatt project, known as Randolph Solar. The proposed solar facility would have a footprint of some 32 square miles, dwarfing other area solar projects in size.

The lawsuit aims to scotch contractual agreements to build the facility and recover monetary and punitive damages from the defendants.

SolUnesco plans to begin construction of the $700 million Randolph Solar facility in late 2023. It is slated to go online shortly before Dominion Virginia Power shuts down its Clover Power Station, which lies just over the Halifax County line from Randolph Solar.

Members of the Devin family own more than 9,200 acres of the 21,000 acres that will be used to develop the Randolph Solar Project. William B. Devin personally owns 35 plats for a total of 2,797.27 acres. The Devin family also owns a 799-acre tract near Chase City that Longroad Energy has sought to develop as a 105 MW solar facility known as 7 Bridges. That project was rejected this week by the Mecklenburg County Planning Commission.

The lawsuit claims the defendants, individually and together, induced 83-year-old Ruth Hansen Wilcox, who is known to have dementia, into granting an option to SolUnesco to lease her family farm for use in the Randolph Solar project. This was done after Towne, the real estate broker, and company CEO Hodsoll were told more than once by Faye Trent that Wilcox was “not interested in providing anyone with an option to lease any real property for use in the Randolph Solar Project,” the lawsuit claims.

When Trent conveyed this position to Hodsoll and Towne, she was acting under the terms of a power of attorney that authorized her to “do and perform all acts, deeds, matters and things whatsoever concerning [Wilcox’s] property and personal affairs,” the suit continues.

An effort this week to reach Hodsoll for the company’s reaction to the lawsuit were unsuccessful. SolUnesco and the other defendants have not yet filed a formal response in Charlotte County Circuit Court after Janson submitted the complaint last week.

The lawsuit alleges that it was Devin, along with Hodsoll, who on Nov. 23, 2020, convinced Wilcox “to execute a written contract entitled ‘Solar Energy Option to Lease Agreement.’” The option grants SolUnesco Holding an irrevocable five-year right to lease all 96.76 acres of Wilcox’s Bailey Farm for use in the Randolph Solar Project.

Hodsoll, company co-founder and CEO, signed the agreement as a representative of SolUnesco.

The November meeting with Wilcox was conducted without the knowledge and consent of Trent, the holder of the power of attorney, and with Hodsoll and Devin’s understanding that Wilcox had been “diagnosed by medical professionals with dementia and associated memory impairment and was incapable of making informed decisions about financial and real property matters,” the lawsuit states.

Devin’s desire to include portions of his and his family’s land in the Randolph Solar project could not be accomplished without SolUnesco first securing an option on Wilcox’s farm, the lawsuit further alleges. It claims that at the time he and Hodsoll met with Wilcox, “Devin had a vested interest.”

The lawsuit contends that Wilcox was given a check for $3,000 for the option, but it was not cashed.

Janson, attorney for the plaintiffs, makes additional assertions in the lawsuit, claiming that Sandra Towne in her capacity as a notary public falsely acknowledged that she had witnessed Wilcox’s signature, and that Devin defamed Trent at a public meeting after she spoke out against the project. That meeting took place before the Charlotte County Board of Supervisors, as Trent complained about alleged actions by Devin, Hodsoll and Towne to obtain Wilcox’s signature on an option agreement.

The lawsuit contends that the Randolph Solar project “has bitterly divided Charlotte County and stands to destroy its rural lifestyle and beautiful scenery.”

It also claims that Towne and her company, Properties of Virginia, LLC are “acting as unregistered lobbyists working on behalf of SolUnesco and the Devin Family to facilitate approval of the Randolph Solar Project,” and that Towne as well as several of her colleagues on the Charlotte County Industrial Development Authority, the Charlotte County Board of Supervisors and the Charlotte County Planning Commission are “financially conflicted and have either not filed the required Financial Disclosure State, Statement of Economic Interests, and Disclosure of Real Estate Holdings forms” required by the Virginia Code or in the alternative “have perjured themselves to conceal their actions.”

Janson said he is seeking a declaratory judgement to determine the validity and enforceability of the option agreement and memorandum of option signed by Wilcox and Hodsoll. He is asking that the contract be rescinded and a conditional use permit application that SolUnesco filed with Charlotte County be withdrawn due to fraud and undue influence.

The lawsuit asks the court to impose unspecified monetary and punitive damages against SolUnesco and Hodsoll for the conversion of Wilcox’s property, along with damages against Towne and Virginia Properties for falsely acknowledging Wilcox’s signature by Towne in her capacity as a Virginia notary public, and damages against Devin for defamation and slander. It also seeks payment of attorney fees, interest, and incidental damages.

His legal claims notwithstanding, Janson said there are other reasons the conditional use permit applications in Charlotte County should be denied or at least put on hold. The Charlotte County Planning Commission recommended approval of a conditional use permit for the project at its Sept. 28 meeting, and the county’s Board of Supervisors is expected to approve the recommendation at its Oct. 11 meeting.

Ahead of the vote last Tuesday by the Planning Commission, Janson said he informed commission members and County Administrator Dan Witt that his lawsuit to stop the project would be forthcoming. Janson also said Charlotte officials were made aware of Trent’s claims of misdeeds by the defendants when she spoke out at a public meeting in August 2021.

This alone should have stalled their decision, Janson said.

He further questioned how a conditional use permit can be approved since the applicant is not registered to do business in Virginia.

According to the staff report prepared in advance of the Charlotte County Planning Commission meeting, the applicant for the conditional use permit for the Randolph Solar project is Randolph Virginia, LLC, c/o SolUnesco LLC, located at 1818 Library Street, Suite 500, Reston, VA 20190. No such entity is registered with the Virginia State Corporation Commission.

In its Integrated Resources Plan (IRL) filed with the State Corporation Commission in mid-2020, Dominion Energy announced potential plans to close the coal-fired Clover Power Station in Halifax County by 2025 as part of its move to reduce carbon emissions over the coming decade.